From John Hennessy:  We repost this (originally from 2010) in advance of our walk through the National Cemetery tonight, for History at Sunset.  It is a vivid example of the conundrums we often face. 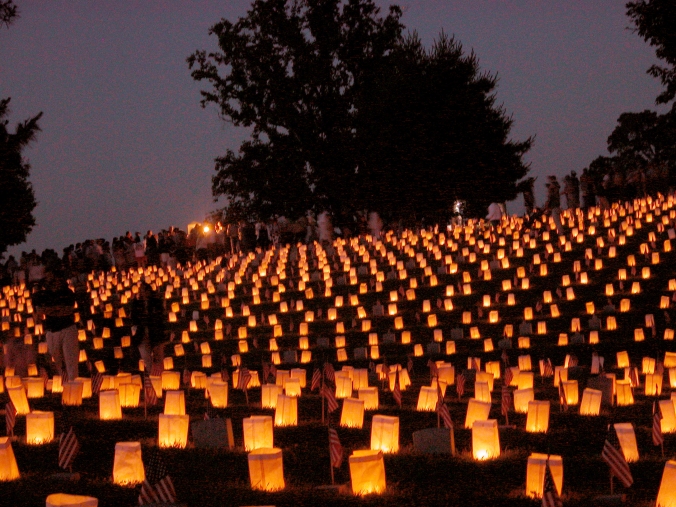 The annual illumination of the National Cemetery–one candle for each of the 15,000 men buried there.

On September 30, 1865, a private of the 11th Connecticut Infantry died in Fredericksburg. The man and his regiment were in town as part of the post-war occupation force. He died not from violence, but apparently from illness. His body was, it seems, buried in the yard of the Mary Washington House on Charles Street. Some sort of marker must have been put over the grave, for when Union soldiers arrived a year or more later to collect the remains of Union dead from the town and battlefield, they recorded finding the body of Charles Fox, Company H, 11th Connecticut.

The body, like more than 15,000 others, was removed to the new National Cemetery on Willis Hill.  At first a temporary wooden maker was put over the grave. We do not know how that marker was inscribed, but at least by the time a permanent marker was put in place (if not when the wooden marker was put in), someone realized that the man buried there was not named Fox. Perhaps it was an error in transcription somewhere along the line; perhaps it was an error by a careless engraver. In any event, the permanent stone over the grave records not the name Charles Fox, but rather this: 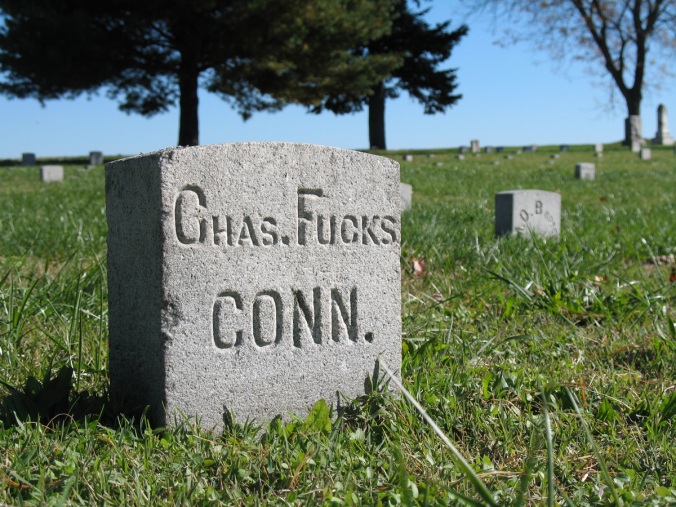 The accumulated trail of evidence–dating from the initial record of burial through the identification on the headstone and more recent research in Compiled Service Records and other sources–leaves little doubt that the man buried in grave #2539 is in fact Charles E. Fuchs, Company H, 11th Connecticut Infantry. While there were a number of Union soldiers with a last name transcribed (perhaps inaccurately) as F-U-C-K-S, none of them are known to have a connection to Fredericksburg and the National Cemetery.

The Fredericksburg National Cemetery was created under difficult circumstances, when passions were high and the number of dead still numbing.  Starting in 1866, burial teams recovered thousands of Union dead from the four battlefields here, as well as from farms and homes beyond the killing fields themselves. While the evidence suggests a careful and systematic effort to honor the dead, the National Cemetery to this day reflects some of the confusion and improvisation that attended the cemetery’s creation.  Incomplete or inaccurate identifications abound, and over the decades, and especially in the last twenty years, the staff and volunteers (most recently led by Donald Pfanz) have worked to identify accurately the occupants of as many burials as possible. Though more than 12.000 of the 15,000 men buried in the cemetery remain unknown, we know far more about the men buried there now than they did when the cemetery was created.  And that presents something of a conundrum.

On the one hand, the most basic act of commemoration is to remember the names of the men who fought and fell.  The power and value of simple remembrance of a simple name is illustrated powerfully by the endless panels of them at the Vietnam Memorial.  Beyond the power of names, descendants naturally want their ancestor’s memorials marked correctly—especially in a National Cemetery—and they look to the government to ensure that.

At the same time, those headstones and the information on them are a vivid reflection of the sometimes-harried circumstances that surrounded the creation of the cemetery–the errors themselves tell us something important. And the National Park Service is dominantly a preservation and conservation agency.

Over the years, park staff tried to reconcile these often conflicting mandates by retaining original headstones—regardless of errors—but allowing families to acquire from the VA a new stone with correct information. These (about a half dozen) were then laid flat at the base of the original headstone. It was an approach that worked well on a practical level. We removed or altered no historic fabric (save minor impacts on the landscape) and we honored the fallen and their families with accurate, publicly accessible information.

But, we discovered not long ago, the practice of adding corrected headstones violates VA policy on the management of graves in national cemeteries.  Instead, headstones with inaccurate information are to be corrected only when replacement due to condition is required.

The idea that we should preserve the National Cemetery as a reflection of the time and place it was created holds a good deal of logic. Certainly, we try to abide by that philosophy when managing historic resources elsewhere in the park.  But within the National Cemetery, preservation of the built environment occasionally comes at the cost of dishonor or disservice to those buried there by simply getting their names wrong. That has certainly been the case for decades as it relates to Charles Fuchs.

The issue raises an important philosophical question: are we simply to preserve the built environment as delivered to our hands, or do we have an ongoing duty to the men buried there, according them dignity, honor, and, when we can, an affirmative identity?  Are we keepers of history or active participants in the nation’s process of honoring those who give all for their nation? Or, as the former park superintendent Russ Smith eloquently put it, “Is our primary responsibility to those who created the cemetery or to those who rest there?”

It’s an interesting question, but it strikes me that the answer to that conundrum as it relates to Charles Fuchs is obvious.  Still, history shows that the devotion to the inherited built environment has traditionally won out over whatever responsibility exists to the memory of the men buried in the cemetery.

I will say in conclusion that some of us feel strongly that after 140+ years, it’s time to fix the Fuchs marker—that we have a moral obligation to, at least, correct an error that many might see (and have seen) as dishonoring a man who gave his life for his nation.  It is an exceptional mistake, but correcting it would entail seeking an exception to the traditional policies that govern us.

7 thoughts on “A cemeterial conundrum: the case of Charles Fuchs (and others like him)”