Let’s pick up our exploration of the great Panorama taken in front of Federal Hill, on Hanover Street, looking west toward Marye’s Heights.  You can find prior posts on this here and here.  Here is the image in full, again, digitally stitched by Donald Pfanz.

Of all the features that helped shape the battle as it unfolded in front of Marye’s Heights, none is more enigmatic than the Fairgrounds.  Before the war the Fairgrounds consumed much of the ground on the left of the panorama.  By 1864, when this photo was taken, only a single vestige of the Fairgrounds remained visible: the dirt road from Hanover Street that led to the front gate of the fairgrounds, which appears as a whitish line  running right to left just beyond the canal ditch. 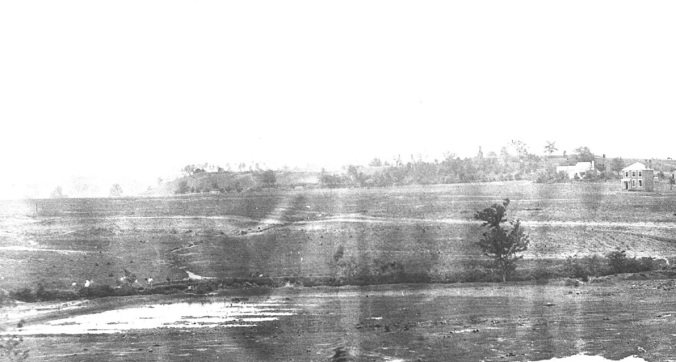 Fredericksburg had long had an annual fair–indeed today it claims to have one of the oldest operating fairs anywhere.  In 1855, the Rappahannock Agricultural and Mechanics Society and the town of Fredericksburg collaborated on the development of this site, which formerly had been cultivated (in fact, both the local diarist Jane Beale and Confederate soldier John Dooley noted the irony that the Irish Brigade charged across a field that in 1848 had been cultivated with potatoes to be sent to Ireland to relieve the famine).  The town purchased the ten acres–which popularly became known as “Mercer Square”–and accorded the Society rights to use it so long as it used the land for its annual fair.  Over the next five years, the Society invested about $2,000 in developing the site, enclosing it with a sturdy board fence and building a variety of small buildings and enclosures.  The only image we have of the fairgrounds comes from the great 1856 Sacshe panorama.  This image dates to just a year after the creation of the Fairgrounds, and no doubt additional development took place on the site subsequently. But, despite its distorted dimensions, it’s still a worthwhile image.

To give some perspective, I also include here a segment from the Virtual Fredericksburg base map.  Note that the Stratton House, clearly visible in the panoramic photograph, stood just north of the north fence, and that north fence ran along what is today Mercer Street (remember, this map is oriented roughly north).

From 1855 to 1860, the Fair served as the central event on Fredericksburg, Spotsylvania, and Stafford’s social calendar.  It was part community fair and part trade show.  In fact, 19th century fairs were vital to the marketing of new products and machines.  The 1858  fair featured the “Fat Lady” and the obligatory “big snake.”  Judges gave awards for livestock, peaches, sweet potatoes, syrup and chinese sugar, blackberry wine, sponge cake, preserves, turnips, beets, apple jelly,  soap, a two-horse plow,  three-horse plow, Osnaburg, “Negro cloth,” barrel flour, ladies shoes, “brogans for negroes,” cigars, pressed brick, and many other things.  “Waite and Sener’s Old Dominion Coffee Pot has been so highly approved by all who have  tried it,” reported the local newspaper.  “A lot of lard exhibited by Mrs. Joseph Alsop would doubtless have won a premium for its brightness, cleanness and sweetness.”  (Lard doesn’t often get such praise these days.)

The climactic event was “The “Tournament,” a contest of “knights” competing on horseback.  In 1858, between three and four-thousand people witnessed this final event of the fair.  The annual winner of “The Tournament”–the “Knight of the Horseshoe”–was entitled to pick the “Queen of Love and Beauty,” a title, it seems, that routinely went to the daughters of Fredericksburg’s most prominent families.

All this revelry ended with war.  In 1861, Confederate troops took over the Fairgrounds as a training ground, naming it Camp Mercer.  When, in April 1862, the Confederates withdrew from the Fredericksburg area, they burned whatever structures stood on the Fairgrounds, leaving some of the fences.  These fences would obstruct the early Union advance across this field in December 1862, but they would quickly be knocked down or removed.  And so, by the time the panorama of the Bloody Plain was taken in 1864, virtually nothing remained.  That the vast majority of Union troops who attempted to cross the Bloody Plain, and thousands who became trapped in the swale, were in fact struggling for life on a piece of ground that before the war had been the site of annual joy and adventure, is largely lost to history.  Here is a view of the Fairgrounds site taken from the opposite direction, from atop Marye’s Heights (in what is today the National Cemetery) looking back toward town.  The Stratton House is at left.  The dark line running through the near edge of the field likely marks the western edge of the Fairgrounds. 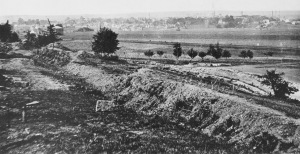 One last offering: the Fairgrounds overlayed on a modern aerial image.  As you can see, the area is completely consumed by housing built between 1910 and 1940.

Ashley Whitehead at West Virginia University has done some excellent work on the Fairgrounds for our Virtual Fredericksurg program; it will be included in the first wave of material put into the system in the coming weeks–material directly related to the Sunken Road and Marye’s Heights, our highest priority area to get up and running.