First an update:  it looks like we have found a way to get people to the lower crossing site safely–though not without some bushwhacking and the inevitable and attendant afflictions of ticks and such. We should be able to announce the date firmly soon. We are working with Spotsylvania County on this, and so we do not have total control on when the tour is done.  For prior posts about the middle crossing site, click here and here. 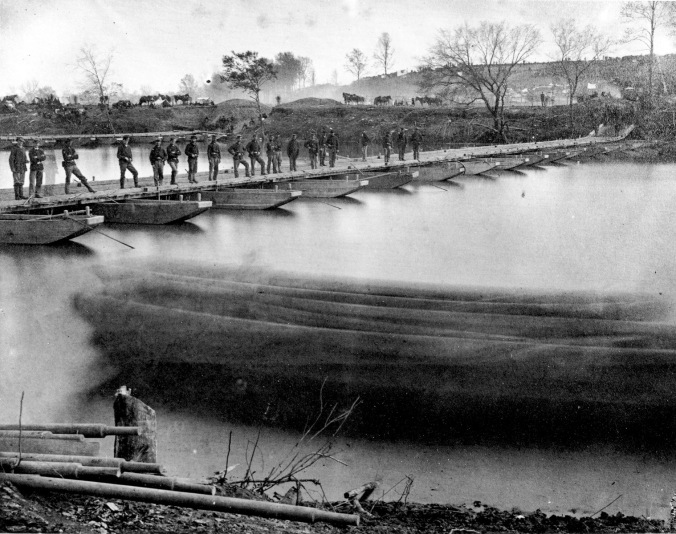 In anticipation of that, we include a couple more views of the crossing site. The first, above, is taken from the Stafford side looking southwest in May 1863. Like most of these images, this one has a multitude of little details worth noticing.

Clearly visible is the extensive cut made in the river bank to create one of the ramps on the south shore.  One would wish and think that some evidence of the huge berms on each side of the ramp might survive, but not so–at least not that we saw.

The image includes a great view of unarmed soldiers posing on the near bridge. These men were likely members of the 15th New York Engineers. Look too at the details of their bridge–essentially very simple structures, with anchored boats, the balks that connected each boat to the next, the cross-planks (chesses–each 13 feet long), and the side rails. A bridge like this could be built in just a few hours and taken apart in less than 60 minutes.

Finally, here’s another image, though admittedly not a very good copy (we do not have a scan of the original). It’s another of the series taken by Andrew J. Russell in May 1863, this one looking back across the river toward the Stafford shore.  Once again, members of the 15th New York Engineers are visible in the foreground. 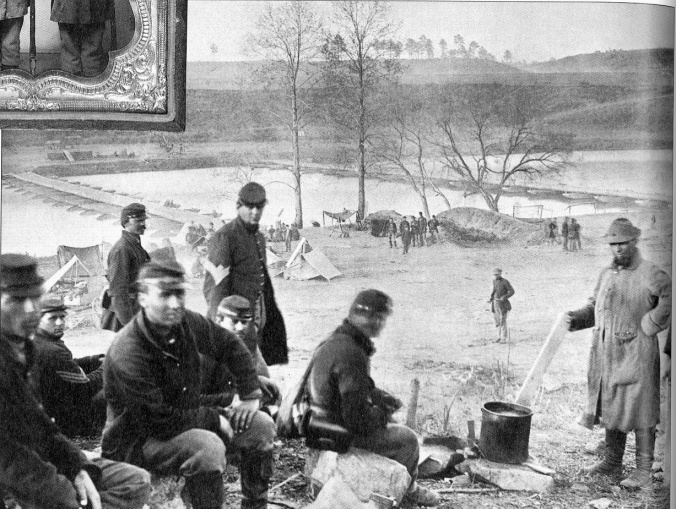 We will use all these and more on our tour in May, and will probably share a few more as we get closer to the date.

2 thoughts on “A bit more on the lower crossing site”